Make more stuff and try not to die…

Sounds like an obvious oversimplification, but maybe it isn’t. Despite the genre’s pretty intimidating reputation, real-time strategy (RTS) games are essentially just a few simple concepts (like making more stuff and trying to not die) crafted into an action-filled but surprisingly approachable package.

The single-player campaign is a great starting point if you’re looking to test the RTS waters. Experience a rich story at a comfortable pace (thanks to difficulty settings ranging from Easy to Very Hard) before deciding if you’d like to delve into the skill-matched PvP modes or cooperative game modes. The various ways to play an RTS, including a wildly diverse pool of user-generated content, allow everyone to live out the fantasy of exploring faraway worlds blanketed in a menacing fog, constructing sprawling bases of otherworldly tech, and commanding massive fantastical armies in a variety of unique ways. Despite the genre’s reputation, sitting down with an RTS doesn’t mean you’re entering an esports training ground. It’s more like embarking on an exploration of a digital sandbox that offers a wide variety of creative and critical decision-making challenges, regardless of your experience level.

If you’re ready to get started, now is a great time to begin your RTS journey with the Warcraft III: Reforged Beta, which is currently available for players who have purchased a BlizzCon virtual ticket or pre-purchased the game. To help on your journey, here are a few tips which should aid you in your next RTS adventure, no matter which title, faction, or mode you decide to try:

First off, let’s get familiar with some basic RTS controls. This part may be boring, but it’s important.

Once you’re familiar with controlling units and issuing commands, you’ll want to understand some of the basic concepts and strategies inherent to RTS games. Let’s dive in:

Every match starts with assigning a few provided workers (the non-combat units typically used for gathering and building) to harvest resources your immediate surroundings. After that, you’ll start creating more workers, which will generate more resources, allowing you to invest in advanced structures, more bases, and a powerful army.

Ensuring that you have enough workers efficiently generating resources as you continue to grow your army and base will allow you to create, maintain, and replenish units and structures as needed. This is known as having a good “economy,” and is one of the most easily forgotten but crucially important paths to victory in most RTS matches. 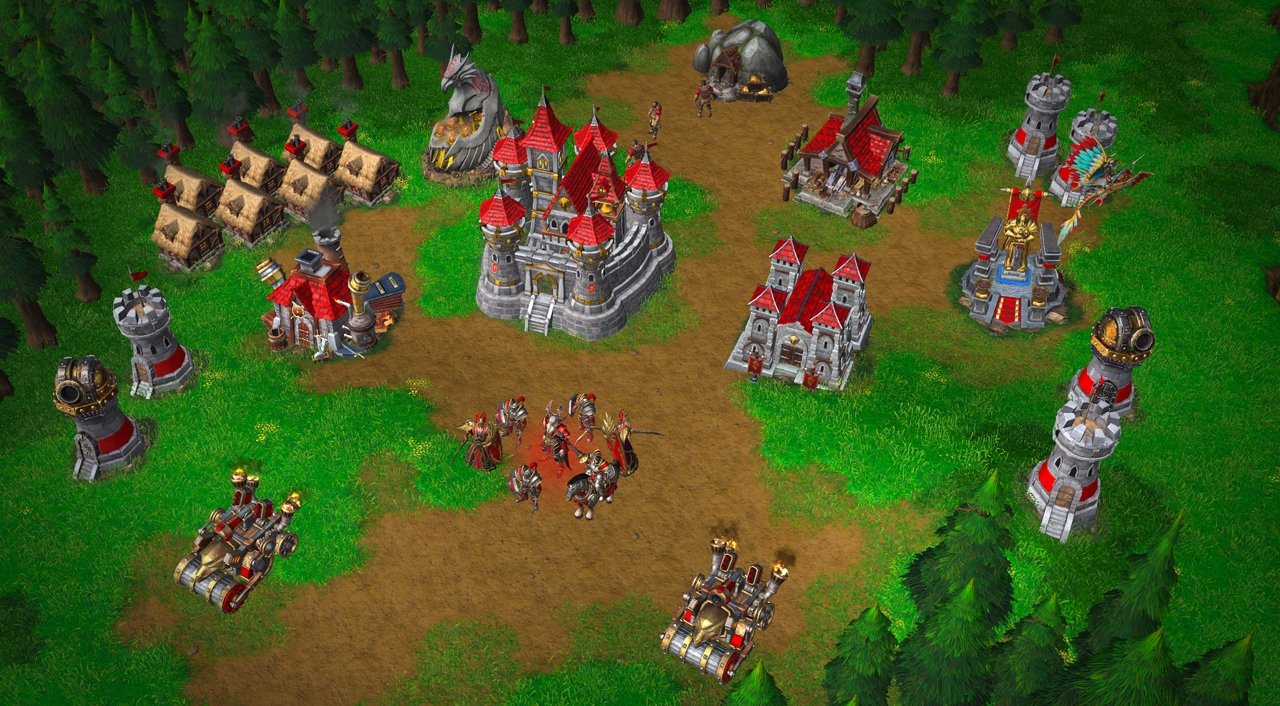 Creating a base of unique structures is one of the more satisfying aspects of playing an RTS, but it’s important to consider why you’re building them before making the investment.

Different structures have different costs, build times, and purposes. Town Hall structures build workers and gather resources, others generate units for your army, and some allow you access to upgrades or different unit types. You don’t need to build every structure available to you in a match. In fact, focusing your strategy on just a few unit-producers at first can help you grasp the basics while effectively completing your goal of annihilating the enemy.

Another important concept to learn is “expanding.” To expand in an RTS means to create new bases or outposts outside of your starting area. There’s a finite amount of resources near your starting base, so expanding is necessary to fuel your war effort in extended matches. There’s also the added benefits of increased vision and available space for buildings and army units.

Creating and Controlling an Army

Building a giant sprawling base is cool, but the only way to win a match is to destroy your enemies. To do that, you’re going to need an army.

While there are significant differences between units depending on the game and faction you’ve chosen, a few simple concepts and strategies will remain constant:

While lumber, minerals, gas, and gold are important resources in an RTS, nothing is more valuable than information.

After you’ve established your economy and kicked off building a base, you’ll probably want to start scouting to gather information on your enemy. Sending out a cheap unit to explore the map early in the game can net you vital information on the enemy’s location, strategy, and economy. You can use this to prepare appropriate defenses, begin building the ideal counter units, or strike them early if you think they’re vulnerable.

In addition to sending out scouting units, strategically placing units or cheap structures around the map can help you stay aware of the enemy’s movements. Try to keep an eye on your minimap to spot enemy movement so you can prepare accordingly.

With this crash course in RTS basics, you’re now well on your way to dominating the Koprulu Sector, culling Stratholme, or just having fun in some friendly custom matches. Good luck out there!